The recent high-profile success on Kickstarter of Technoir inevitably makes any RPG publisher consider it as a potential way of marketing. Even moderate sized companies like Evil Hat have a kickstarter project going. It seems there is a band-wagon and a lot of people are getting on-board so why not 6d6?

According to Kickstarter themselves, only 43% of projects reach their funding goals. 21% of projects never receive a single pledge! Interestingly, once a project has reached 30% of its funding goal it has a 90% chance of success.

Whilst no one thinks they are going to be one of the failures, the facts speak for themselves. With less than a 50/50 chance of succeeding, we would prefer to put our time and efforts in to improving our products. We believe the most reliable way to success is to have a damn good product.

Kickstarter is a brilliant idea and is booming right now. Jumping on the bandwagon may seem like a good idea but so did setting up as an internet retailer in 1999. Things that boom also go bust, or at least deflate a bit. For those people who time it right and ride the boom it can be very profitable but for everyone else, it is a waste of time and money.

Recent successes are likely to unleash a flood of RPG Kickstarter projects. With a limited audience of potential backers, the odds that any of them get funded goes down. Again, it makes sense for 6d6 to focus on what it is already doing than follow the herd.

Waiting For The Horror Story 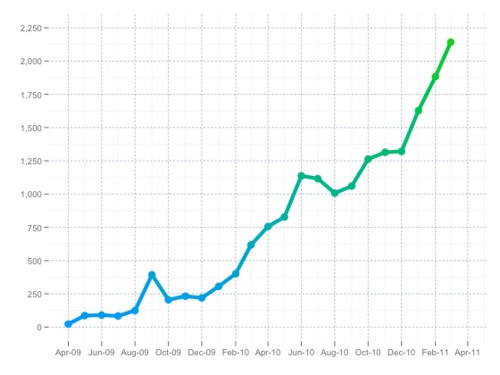 Kickstarter is two years old and has grown rapidly over the last year (see the graph). Most of the successfully funded projects haven’t yet delivered the goods because films, comics and games generally have an 12 – 18 month development cycle. It will be interesting to see how many actually fulfill the commitments they have made.

With traditional start-ups, investors spend a lot of time making sure the people behind the project have the skills needed to develop and deliver the product. Even with all that checking, at least a quarter of start-ups fail to get the product ‘into the shops’. With Kickstarter, there is no checking, no due-diligence. It is inevitable that some, possibly many, people are not going to get what they paid for. How that impacts on Kickstarter and projects funded through it remains to be seen.

Ultimately Kickstarter is the wrong business model for 6d6 and, I believe, for most RPGs.

6d6 is based on a product that gradually grows and evolves overtime because that evolution will make it fitter and stronger. Whereas Kickstarter is based on a single, short-term project with a simple defined goal, e.g. make a film. It does not lend itself to long-term thinking.

In RPGs, this single project focus is a bad fit generally. The market is not about producing a pretty boxed set, shipping it to stores and watching the money roll in. Very few gamers buy products from stores based on the packaging. Gamers buy games they have already enjoyed playing or that have been recommended to them by someone they trust. This requires a fan base and building a fan base takes time.

The RPG market is about games people play for months or years on end. It is a long term marketplace that fits badly with the Kickstarter focus on specific, short/medium term goals. There are and will be RPG projects on Kickstarter that will be funded successfully and deliver the goods but only a tiny handful of those projects will develop into a stable company that produces a second product. Those that do will be the ones that used the initial buzz to build a fan base through blogging, social networks and, above all, demo games.

Rasmika Joyanto is White Tiger Paladin of the Moon goddess Otone. She’s traveling to prevent a prophecy of destruction and find a good cup of tea.

END_OF_DOCUMENT_TOKEN_TO_BE_REPLACED

Valquine Llewis used to be a humble civil servant but now she has a hammer and blood feud to settle. #ttrpg #character

END_OF_DOCUMENT_TOKEN_TO_BE_REPLACED

Nyra Greyflight is a very excitable moth fairy and cleric of Hades whose become fascinated by ballet.